Each year, Americans observe National Hispanic Heritage Month from September 15 to October 15, by celebrating the histories, cultures and contributions of American citizens whose ancestors came from Spain, Mexico, the Caribbean and Central and South America. National Hispanic Heritage Month celebrates and recognizes the contributions Hispanic Americans have made to American society and culture and to honor five of our Central American neighbors who celebrate their independence in September.

National Hispanic Heritage Month had its origins in 1968 when Congress passed Pub. L. 90-498 (PDF, 153KB),  which authorized and requested the President to issue an annual proclamation designating the week including September 15 and 16 as National Hispanic Heritage Week.  By directing that this week should include September 15 and 16, this law celebrated Hispanic Americans and the anniversaries of independence for the Latin American countries of Costa Rico, El Salvador, Guatemala, Honduras and Nicaragua as well as Mexico’s independence on September 16.  In 2010 Mexico is celebrating the bicentennial of its independence. President Lyndon Johnson issued the first such proclamation, Presidential Proclamation 3869, which stated in part:

Wishing to pay special tribute to the Hispanic tradition, and having in mind the fact that our five Central American neighbors celebrate their Independence Day on the fifteenth of September and the Republic of Mexico on the sixteenth, the Congress by House Joint Resolution 1299, has requested the President to issue annually a proclamation designating the week including September 15 and 16 as National Hispanic Heritage Week.

Between 1969 and 1988 Presidents Nixon, Ford, Carter and Reagan issued a series of annual proclamations that designated a week in September including September 15 and 16 as National Hispanic Heritage Week.  These proclamations celebrated the contributions to America of men and women of Hispanic origin as well as recalling the work of the early Spanish explorers and settlers.

In celebration of Hispanic Heritage Month, we created a photo collage, highlighting 18 country flags, which represents some members (students, faculty and staff) from our college family of Hispanic/Latin descent. 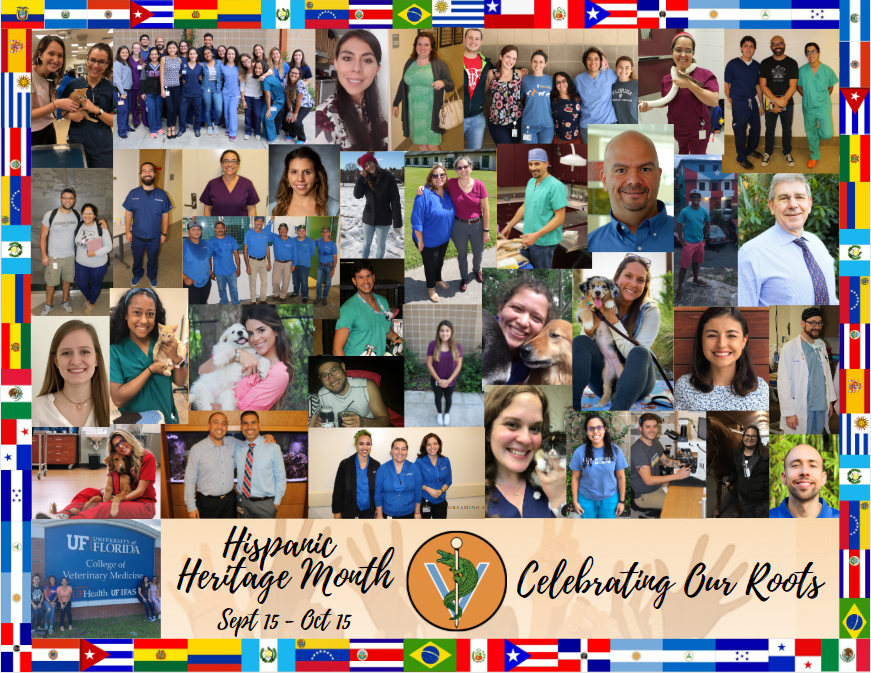 A Fulbright Scholar, De María is an international Ph.D. student in the University of Florida College of Veterinary Medicine’s department of physiological Sciences and in UF’s Aquatic Animal Health Program.

A native of in Montevideo, Uruguay, she grew up in the land of soccer, contemplating the sea. She decided to study biology and perform a master’s degree in ecology and evolution while in Uruguay.

Her research has always been related to anthropogenic activities and wildlife, particularly marine mammals. She also participated in a successful interdisciplinary project aimed at understanding the problems of artisanal fishers in Uruguay. Among the problems addressed in this participatory project was the interaction of fishermen with sea lions.

De María has also worked with trace elements in sea lions and its trophic transfer. At UF, she is creating her own path in research in toxicology, with the guidance of experienced and innovative advisors, studying the consequences of herbicide exposure in the immune system of fish and manatees.

Manuel Lima, D.V.M., is a 2017 graduate of the UF College of Veterinary Medicine who also received a certificate in business management from the college upon graduation. From the age of 10, when he assisted his local veterinarian in Matanzas, Cuba, with surgery on his dachshund, Rocky, Lima knew he wanted to become a veterinarian.

Born in Matanzas, Lima moved first with his family to Mexico, then arrived in the United States when he was 15. After settling in Orlando, he began learning English while he was in school. He attended the University of Central Florida, receiving a bachelor’s degree in biology, before being accepted into veterinary school at UF. Since graduation from the college, Lima has moved back to the Orlando area to work as a veterinarian at the Boggy Creek Animal Hospital, where he is now part owner.

Lima is thankful for the many influential people who helped him in his journey. One of his greatest objectives is to mentor passionate, aspiring veterinary students. He and his wife, Kaity, live with their golden retriever mix, Oso. Proud of his parents’ tenacity and sacrifice in moving to this country, Lima feels he is now able to serve the greatest profession in the world, helping animals and humans alike.

(Special thanks to Jeleah Nuñez for recommending Dr. Lima for our series)

Aurora Velazquez Echegaray, D.V.M., was one of the first women to study veterinary medicine at the Faculty of Veterinary Medicine and Husbandry of the National Autonomous University of Mexico (FMVZ-UNAM), which was the first veterinary school in the Americas.

She was the second woman to receive a D.V.M. degree from that university and one of the first virologists in the area. She was the founder of the department of microbiology and immunology of the FMVZ-UNAM.

Velazquez was key in the mass production of the vaccine for foot and mouth disease and in the Mexican National Campaign for its complete eradication from the country (circa 1940’s). She dedicated more than 60 years of her life to the veterinary medical profession and its advancement in teaching, research and outreach.

(Special thanks to Dr. Myriam Jimenez for recommending Dr. Velazquez for our series)

Leo Londoño, D.V.M., is a clinical assistant professor of emergency and critical care and director of the hemodialysis unit at University of Florida. Londoñ​o was born and raised in Colombia and Spanish is his native language. He received his DVM from University of Florida College of Veterinary Medicine in 2011 and completed his residency in emergency and critical care at UF in 2015 after completing a rotating internship at Hollywood Animal Hospital in South Florida. He received his certificate in dialysis from University of California, Davis School of Veterinary Medicine in 2017. He is the first Latino to receive Diplomate status in the American College of Emergency and Critical Care (ACVECC). His research interests include renal and non-renal applications of extracorporeal blood purification techniques, endothelial and glycocalyx pathophysiology in the critically ill, and hospital-acquired acute kidney injury. He lectures internationally about acute kidney injury, hemodialysis and other critical-care related topics. His international lectures have a special focus in Latin American countries; in the past year, he has lectured in Argentina, Brazil, Chile, Colombia, Puerto Rico and Mexico. He also helped to open the first-ever dialysis unit in Chile in June 2017.

Jesus Aramendi, D.V.M., was born and raised in Venezuela and earned his veterinary degree from the Universidad Francisco de Miranda. His first job was in Miami, following an internship that he completed there prior to his last year at university. Working as a veterinary technician at a small animal practice, he gained valuable on-the-job experience treating pets and learning the business of veterinary medicine.

A few years into his career, Aramendi took his board certification examinations to get his license and begin practicing veterinary medicine in the state of Florida. He joined Banfield Pet Hospital in 2008, first working as an associate veterinarian in the Jacksonville area. He returned to Miami after six months in that position to become the lead veterinarian managing other associates, medical quality and client service.

After a successful run as chief of staff at another, larger hospital, Aramendi was promoted in 2013 to medical director managing several hospitals and their respective staffs, a role in which he would have a bigger impact on the quality of medical care by leading people and developing teams to be more productive and efficient.

In 2016, Aramendi was promoted again to regional medical director, with 10 markets and 160 hospitals under his direct supervision. He is in charge of assuring that each of these hospitals meets Banfield Pet Hospital standards for doctor engagement and quality of care and service to their pet patients.

(Special thanks to Dr. Michael Bowie for recommending Dr. Aramendi for our series)

A native Floridian, Marquez received her bachelor’s degree in marine ecology and conservation from New College of Florida and her master’s degree in marine biology from Victoria University in Wellington, New Zealand. Inspired by Discovery Channel’s Shark Week, she knew that she wanted to research marine biology and more specifically sharks and their relatives. She spends her days studying their habitat, migratory behavior and the way in which humans affect them. She also founded The Fins United Initiative (TFUI), which is a program that aims to educate school-aged children about sharks through learning techniques that allow non-experts to comprehend the role these particular animals play in our oceans and the threats they face. Marquez, who is half Puerto Rican and half Mexican, saw the lack of representation in marine science when she was growing up. She wants to shine a spotlight on not only marine biology but also STEM fields in general so that young Latinas can see these fields as viable careers.

(Special thanks to Kimberly Blair, LVT, for recommending Melissa for our series)

Carlos Augusto Risco, D.V.M., is a member of the UF College of Veterinary Medicine’s charter class of 1980. Upon graduation, he spent a decade in a private dairy farm practice in California before returning to his Alma Mater as a faculty member in 1990. He is a Diplomate in the American College of Theriogenologists. Risco, was born in Cuba and is bilingual. His father, a human cardiologist, brought his family to the United States to escape the rule of Fidel Castro, and to provide his children with the opportunity to get an education and a more secure future. Risco became a global traveler, especially to Latin America, in order to share his knowledge in dairy cattle production. He spent 27 years on the UFCVM faculty, serving as chair of the college’s department of large animal clinical sciences from 2013-2018, when he left UF to become dean of the Oklahoma State University College of Veterinary Medicine.

(Special thanks to Dr. Maarten Drost for recommending Dr. Risco for our series)

In addition to his academic career, he was an equine practice owner in Vancouver, British Columbia, for over 20 years as a solo practitioner and later in a group setting. Dr. Samper has consulted extensively in North and South America and in Europe. In addition to several scientific articles, he is the editor of Equine Breeding Management and Artificial Insemination and co-editor of Current Therapy in Equine Reproduction. He is an active member of the American Association of Equine Practitioners and is past-president of the Society for Theriogenology and North East Association of Equine Practitioners. Dr. Samper served as a consultant for Sexing Technologies and as chairman of the International Symposium on Stallion Reproduction, as well as on the board of directors of the American College of Theriogenologists.