A human placenta-derived compound developed by a University of Florida faculty member in the Herbert Wertheim College of Engineering is being used with promising results by veterinarians at UF’s College of Veterinary Medicine to treat animals with severe bone loss.

Without the compound, the animals — which included a giraffe at the Jacksonville Zoo and Gardens and two pet dogs — would have almost certainly faced amputation of the affected areas, the veterinarians said.

The product’s developer, Peter McFetridge, Ph.D., the Integra Lifesciences Term Professor in the J. Crayton Pruitt Family Department of Biomedical Engineering, studies the engineering of viable “living” tissues and organs for the repair and regeneration of diseased tissues. Stan Kim, BVSc., an associate professor of small-animal surgery at UF, learned of McFetridge’s work and was intrigued about the placental compound he had been testing in rodent models with some success.

McFetridge and Kim began discussing possibilities for the product’s additional use in small animals. Kim treated the dogs with the new compound at UF’s Small Animal Hospital earlier this year.

“Both dogs had very bad fractures that did not heal and had lost a lot of bone,” Kim said. “Typical treatments usually fail in these types of cases.”

The dogs were completely healed after the placental treatment, he said, and are doing very well.

“The most exciting thing about the placental compound is that it seems to regenerate bone in a remarkable manner,” Kim said. “Although our main excitement is with regenerating bone, we have also had very positive results with wounds.” 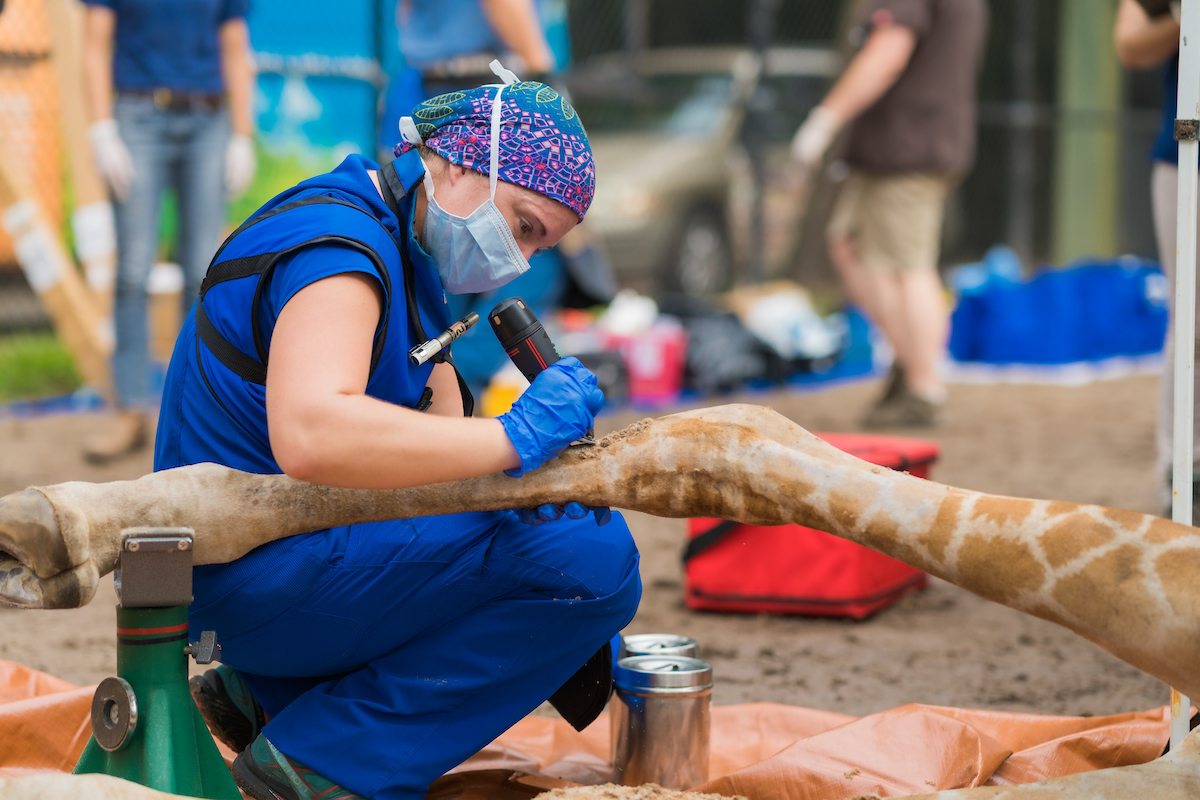 Meanwhile, Kim’s colleague, Adam Biedrzycki, BVSc., Ph.D., an assistant professor of equine surgery at UF, had been contacted in January by the Jacksonville Zoo and Gardens about the possibility of helping with the treatment of a 2-year-old reticulated giraffe named JoJo, who had become severely lame in October. Despite various treatments provided at the zoo, JoJo’s foot problems had worsened.

“They asked if I or a colleague had any interest in consulting or participating in the case,” Biedrzycki said.

JoJo had a severe case of septic arthritis in the medial claw of her right front foot, he said. The zoo had been treating the giraffe with analgesics, antibiotics and stall rest, and had even applied a custom-made boot from a farrier who works with exotic hoof stock. However, radiographs appeared to show bone abnormalities and deterioration, contributing to lesions and fluid drainage.

“I told them that giraffes are certainly not my area of expertise, but in a bovine or horse with this condition we would do massive bone grafts, place antibiotic beads, administer antibiotics directly into the limb and spend lots of time and money trying to save the digit. In a cow, we would drill out and remove the dead or damaged tissue surrounding the foot bone. Then we would cast it followed by regular bandage changes on the limb and leave it to heal.”

That was essentially what was done with the giraffe, he said — but with the addition of the placental compound.

Biedrzycki spoke with Kim, who had used the placental compound successfully in a few cases. Kim put Biedrzycki in touch with McFetridge to further discuss the product and its potential for treating infections and stimulating bone growth.

Biedrzycki then brainstormed with Jacksonville Zoo veterinarian Yousef Jafarey, D.V.M., and his team to develop a plan: They would cut out the diseased bone, clean out the area and put in bone allografts, antibiotic beads and the placental product “to try to speed things up.”

The giraffe wore a cast on her foot, and three cast changes were performed six weeks apart. The second time, the area was cleaned out a bit more and additional placental compound was applied, Biedrzycki said.

“It was a very big deal,” he said. “I was really impressed with the whole team effort.”

That effort involved the zoo’s keepers, its animal health team, an anesthesia crew and many more people performing various duties along the way, Biedrzycki said.

“You also had an army of people massaging the giraffe’s neck, another team putting antibiotics in the vein, and the surgery team working on the foot, along with a farrier to help trim the foot,” he said. “There were probably about 30 people altogether working on this giraffe. I think they have the whole procedure down to an art now.”

He said the collaborative effort and range of expertise at the zoo was likely why JoJo did so well with the procedure and continues to improve.

“So far, the outcome is excellent,” he said. “The infection is gone and there is new bone growth at the site showing fusion between the bones, which is really unheard of. She still has some limb swelling, which will take a while to go down. But JoJo seems pretty happy at this stage.”

Jafarey said the zoo was astounded at JoJo’s progress since working with Biedrzycki and the UF team.

“The introduction of this new compound has been integral in her recovery and we are excited that our organization participated in this groundbreaking research,” he said.

The material the UF veterinarians have been using started out being used to drive the regeneration of large vessels for heart bypass, McFetridge said.

“I never thought it could be used clinically, as it contains a lot of human maternal tissues, from the placenta, as well as the fetal side of the placenta,” he said. “But after several animal studies, we discovered that there was no negative immune response at all, and that it had a potent healing effect across a range of different tissues.”

Unlike typical biologic treatments that have one response, the placenta-derived material seems to promote healing in several vastly different tissues including bone, blood vessels and skin, McFetridge added.

McFetridge and two of his biomedical engineering department colleagues, Jon Dobson, Ph.D., the J. Crayton Pruitt Family Professor, and Blanka Sharma, Ph.D., an associate professor and the J. Crayton Pruitt Family Term Fellow, have co-founded a company in Gainesville, 42Bio, to commercialize the product for veterinary applications. They recently got private funding to move forward with research facilities at The Hub, UF’s business incubator.

“So we’re hoping to be able to provide this amazing material more widely, especially as we find out, almost daily, how well it helps heal critical injuries. The healing responses we’ve seen in the giraffe and the dogs are almost jaw-dropping.”