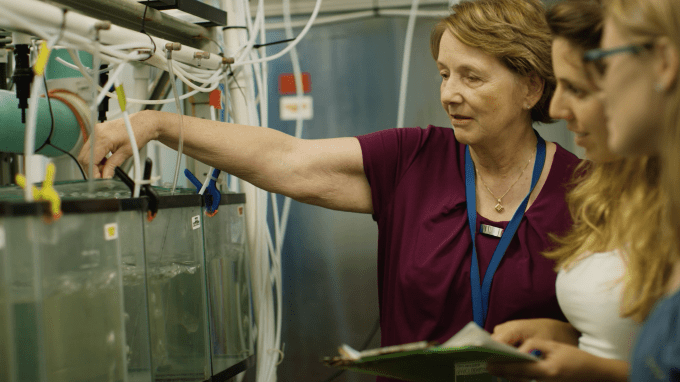 Dr. Nancy Denslow, a professor and director of aquatic toxicology at UF, is shown with Maite De Maria Mulet, center, and another of her graduate students in UF’s Aquatic Toxicology Laboratory. Denslow worked with Mulet and other graduate students on a class project that evolved into a critical review published recently in a peer-reviewed journal.

A group of graduate students working on a class project at the University of Florida developed a critical review of what’s known — and unknown — about the effects of certain cancer drugs on aquatic ecosystems. Their conclusion: Studies are lacking that characterize these impacts, and more research is needed to inform future regulations.

“Many human pharmaceuticals enter aquatic environments through excretion and wastewater treatment facilities, and these drugs can negatively impact aquatic organisms,” said Chris Martyniuk, Ph.D., an associate professor of toxicology in the UF College of Veterinary Medicine’s department of physiological sciences. He led the project and served as corresponding author on the group’s paper, which appeared in March in the journal Environmental Toxicology and Chemistry.

“Cancer is one of the leading causes of death, and with an aging population, it is expected that there will be a higher frequency in the use of antineoplastic agents,” said Martyniuk, who also is associated with UF’s Center for Environmental and Human Toxicology. “We were surprised to find out that we know very little about the impacts of chemotherapeutic drugs, also known as antineoplastic agents, in aquatic environments.”

Scientists do know that these pharmaceuticals are likely toxic to algae, shellfish and fish, as well as to large aquatic animals — because they are specifically designed to kill cells. But only a handful of studies have been conducted to investigate toxicity of these pharmaceuticals in aquatic invertebrates, frogs and fish, Martyniuk said.

Three graduate students, two from the veterinary college and one from the UF College of Public Health and Health Professions, and two additional faculty members from both colleges worked together to analyze available peer-reviewed data and quantify the risks associated with contaminated water.

“Our study identifies some of the antineoplastics that show the highest concentrations in aquatic ecosystems and determines that our understanding of the toxicity of these chemicals is nonexistent, compared to other classes of pharmaceuticals,” Martyniuk said.

The project started as a class assignment in Martyniuk’s Advanced Toxicology course in the fall of 2018.

“We were talking about pharmaceuticals in the aquatic environment that are emerging contaminants,” said Maite De Maria, a Ph.D. candidate in the physiological sciences department and the paper’s first author. “Dr. Martyniuk suggested antineoplastics, so we did a preliminary search and realized that this category of drug had not been sufficiently studied.”

De Maria and fellow graduate students Alexis Wormington and Hajime Kurita, Ph.D. candidates from the UF colleges of Public Health and Health Professions and Veterinary Medicine, respectively, looked for the most commonly used antineoplastics, and which ones were found in the aquatic environment.

“We realized that they are present in water and may not be efficiently removed; there were little to no data on this issue that was derived from water systems in the United States, and there were few from Europe and other parts of the world,” she said. “That’s when we realized that we should focus on this topic and draw the scientific community’s attention to this gap.”

The classmates separated their assignments to reach their goal: What one student did set the groundwork for the next student’s research, so that all sections were interdependent. For example, from the literature review and the effects in aquatic organisms, the group highlighted possible consequences in the immune system from two of the most prevalent antineoplastics, adding value to their work, De Maria said.

“As graduate students, it is great to finalize a class project like this,” she added. “You realize that you are knowledgeable in a certain area — that you can identify gaps and share your work with the scientific community, environmental regulators and the public. Being part of an exercise such as this really helps us build our confidence in ourselves as young scientists.”

Additional investigators who served as advisers on the project were Nancy Denslow, Ph.D., a professor of aquatic toxicology in the College of Veterinary Medicine, and Joseph Bisesi Jr., Ph.D., an assistant professor in the College of Public Health and Health Professions.