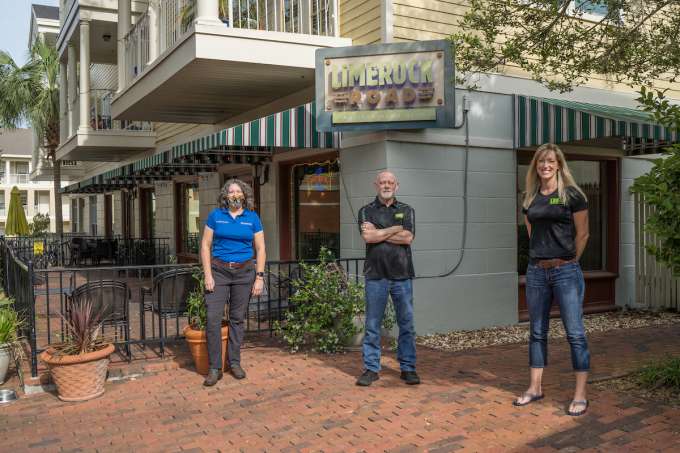 It was a turkey sandwich she’ll never forget.

On March 19, with the University of Florida Veterinary Hospitals closed for all but emergencies because of COVID-19, Erin Gorey, a client liaison for the UF Large Animal Hospital, was doing her job as best she could given so much uncertainty and operational changes. Suddenly, dozens of boxes of lunches arrived, filled with turkey, ham and vegan sandwiches, chips and cookies.

“It was really nice to have the lunches at such a kind of a crazy and unknowing time,” said Gorey, who assisted in delivering the meals to several different locations within the hospital when they arrived. “It really mattered that they thought of us that way.”

As essential faculty, house officers and staff worked valiantly to keep the hospitals running and to care for their animal patients, all the while navigating the effects of the coronavirus pandemic on their own families, faculty clinicians from the large and small animal hospitals recognized the toll the situation was taking on their co-workers. A few who regularly patronized certain local restaurants were also acutely aware of the consequences the pandemic was having on these establishments.

“We wanted to thank the people working so hard to keep the hospital going, while also raising awareness of the major hit our favorite restaurants and their owners were taking as a consequence of the social restrictions,” DeNotta said.

The result: Carry Out and Carry On, an effort through which DeNotta and Sanchez purchased 40 boxed lunches from Fresco’s Pizza & Pasta and Limerock Road Neighborhood Grill, both located in Haile Village, and had the meals delivered to appreciative employees of the large animal hospital.

“The restaurants were still selling meals as takeout, and everybody loves free food, so it seemed like a win-win,” DeNotta said.

DeNotta, a Haile resident, and Sanchez, a former Haile resident, had a special affinity for Frescos and Limerock. Both knew the restaurants’ owners, Gordy and Jen Braund, a local couple who support various charities and fundraisers throughout the year. Gordy Braund personally packed the meals to ensure that all were made as cleanly and safely as possible.

Meanwhile, at the other side of the hospital complex, Kris Cooke, D.V.M., an associate professor of small animal medicine, was mulling a similar concept.

“Dr. Sanchez is the common denominator,” Cooke said. “I’d been talking to her about trying to support local restaurants to try to keep them in business. She mentioned what Sally planned to do, and I thought it was a great idea. So I stole it.” 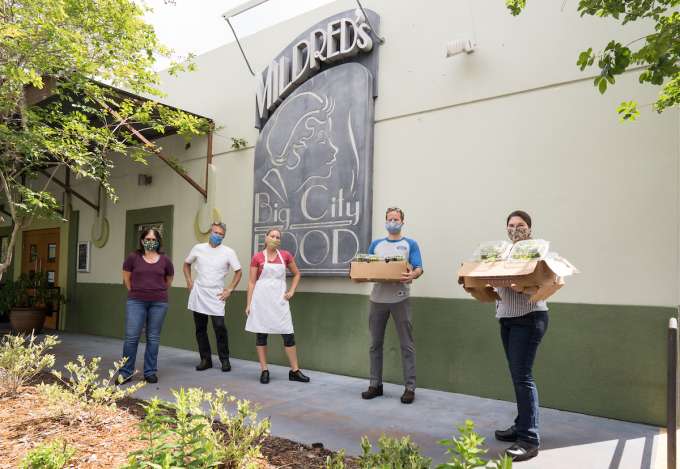 “He’s a big supporter of local agriculture,” Cooke said. “On a personal level, the staff at Blue Gill is fabulous and know many of us from the UF vet school on a first-name basis.”

Cooke talked to a few of her colleagues about the possibility of pooling resources, given that the number of faculty and staff working in the small animal hospital is quite a bit larger than those working in the large animal facility.

“I ordered 90 lunches from Blue Gill for me to pick up on the designated day,” Cooke said. “Later, the staff at Blue Gill called me to offer to deliver the lunches, because they were worried that I wouldn’t have enough room in my car. Ninety lunches disappeared in a matter of minutes!”

Unfortunately, Blue Gill closed soon after the lunches were delivered. Closing its doors was essential to ensure the best likelihood of its eventual reopening, Bert Gill said, adding that the hardest thing was having to lay off 47 employees, although he hopes to bring them back. Gill continues to cook his made-from-scratch, locally sourced food for takeout at his other restaurants, and devotes much of his time these days to community feeding efforts in conjunction with other partners.

His relationships with the veterinary school and UF’s Institute of Food and Agricultural Sciences are longstanding and sincere, Gill said.

“We get to know a lot of people, and have a genuine culture within the business, caring about what we do, and the needs of our guests. When Vet Med comes in, it’s a big deal. And I watch how everybody develops relationships with my co-workers and myself, and there is genuineness to that.”

“This all hit us in our busiest time of the year, and we don’t have a road map, unfortunately. Nobody does,” Braund said. “We’re going a day at a time, a week at a time, negotiating with vendors and trying to keep going as well as we can.”

He said the UF veterinary college interested him because it brings faculty to the community from all over the world and, he said, veterinarians by nature tend to be community-minded people.

“Sally’s a good example of how someone comes to town and forms a bond,” Braund said. “She came to us and said, ‘You need help, and the people in the large animal clinic need help, so let’s collaborate.’”

On the day the boxed lunches were delivered to the UF Large Animal Hospital, DeNotta showed up at Frescos in a Limerock T-shirt, running shorts, gloves and a mask and helped load and deliver the lunches.

“Those lunches amounted to half of our sales for that day,’’ Braund said. “It was a huge part of our revenue.’’

Numerous emails of thanks and calls to the restaurant ensued. DeNotta’s efforts even generated another request for 40 meals to be delivered to UF Health. “This allowed us to stay in business and do a little good,” Braund said. “It was good for our staff, a number of people heard about it and ordered other meals and it was good all around. We were grateful for that opportunity to connect.”

Large animal veterinary technician Chelsea Lopez, was among those who enjoyed her lunch that day.

“These trying times make it difficult to be away from our families, friends and animals, but our community and Vet Med have come together with overwhelming support to make these times a bit easier for everyone,” she said. “The lunches were not just a meal, but a representation of the support and determination the Gainesville community continues to provide.”