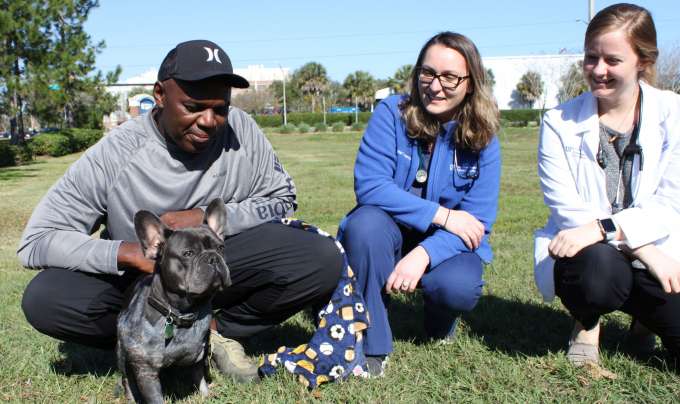 Moments after a young French bulldog named Neo arrived at UF’s Small Animal Hospital early Christmas morning, bleeding heavily with severe trauma wounds, his heart gave out. In the critical seconds that followed, a team of veterinary emergency specialists and technicians on duty sprang into action.

The steps they took not only revived him – literally bringing him back from death – but also ensured he would have the very best chance at a full recovery.

Neo didn’t let them down. On January 2, after extensive monitoring in the hospital’s intensive care unit and surgery to remove a leg with injuries too extensive to save, UF veterinarians discharged the 30-pound pup, who mugged for cameras while his grateful owner, Gerald Ford, held him close, wiping tears from his eyes.

Three weeks later, a smiling Ford and bright-eyed Neo were back in the UF clinic for suture removal and a general recheck. Although Neo remains on an antibiotic to fight infection from his wounds, which were likely caused by an animal attack, he passed his health inspection with flying colors.

The attack occurred sometime on Christmas Eve, after Neo ventured into the woods adjacent to Ford’s home. After hours missing, Neo somehow made his way home, up the porch steps and inside the house, where Ford awakened to a sound and found his badly injured dog staring at him in his doorway.

Someone he called recommended Ford take Neo to UF’s Small Animal Hospital, a facility he had never visited previously and didn’t know existed. He says he has no regrets about the decisions he made to allow UF veterinarians to do everything possible to save Neo.

“I don’t have kids,” said Ford, a truck driver who lives on 12 acres of property near White Springs. “He goes with me everywhere, and everyone in my family loves him. Neo is like my child, and he deserved the chance to live.”

UF’s team of doctors kept Ford informed every step of the way as to what they were doing, and why. Each step felt like a milestone — both for Ford and for Neo’s care team. 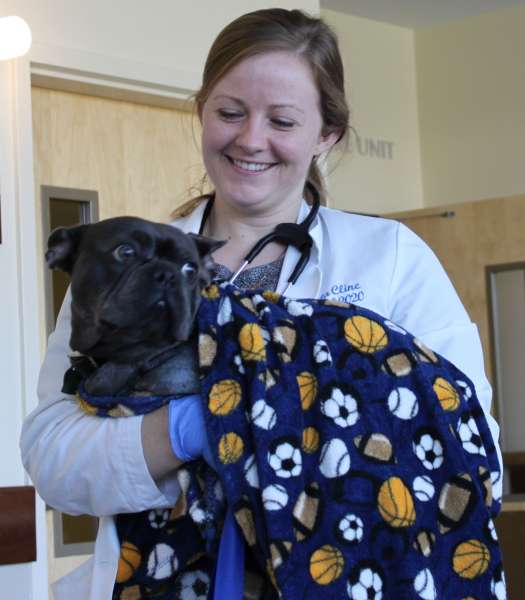 Kayla Cline, a fourth-year veterinary student, brought Neo to his owner on the day of his discharge.

When Neo’s heart stopped soon after arrival, veterinarians immediately began CPR: Some team members performed chest compressions; others inserted a breathing tube and placed a catheter through which fluids could be administered. Within minutes, and against long odds, Neo’s heartbeat returned.

The team was elated, but there was no time to celebrate.

“I tell my students: Once a patient comes back, or is revived, that’s when the hard work begins,” said Dr. Bobbi Conner, a clinical assistant professor of emergency medicine, who supervised Neo’s care.

The team continued to monitor Neo’s breathing and his vital signs. The most important next question was if and when Neo might begin breathing on his own, which would indicate the extent to which the loss of oxygen and other vital nutrients that would have occurred after his heart stopped were affecting him.

Once again, Neo defied probability. Just minutes after his heartbeat resumed, he began breathing normally — likely because of how quickly the team was able to get his heart beating on its own again, while replenishing his body with the fluids he needed, Conner said.

Thankfully, Neo only needed minimal medications to support the function of his heart and vessels, most likely because his organs weren’t deprived of oxygen for too long.

“The other key to Neo’s successful resuscitation was that his arrest was caused by a treatable problem,” Conner said. “Specifically, he was very behind on fluids. While this was severe, it is something relatively easy to correct in the short-term. With Neo, we had something we could ‘fix.’”

In the days that followed, veterinarians turned their attention to Neo’s wounds, which needed a lot of care. Despite aggressive therapy, the team was losing the battle with his most severe wounds, which were on the dog’s left front leg.

“This leg had actually become the biggest source of risk for Neo,” Conner said. “We knew the best chance of him making a full recovery was for us to amputate.” Once that procedure was performed, Neo recovered quickly and was ready to get out of the hospital.

“Neo’s success was particularly poignant for our team for a couple of reasons,” Conner said. “The odds of sending a patient home to their family after arresting is exceedingly small. Neo is special for that alone”

The holidays can be very difficult and emotional times for people working in an emergency room or intensive care unit, she added.

“Everyone working is away from their own families during this time, and everyone who comes to see us is, by definition, having a bad day. We don’t get to give everyone good news,” Conner said. “Although Mr. Ford’s Christmas morning started out about as bad as it could have for him and for Neo, his commitment to give Neo a chance to pull through gave us a chance to get his friend home to him.”