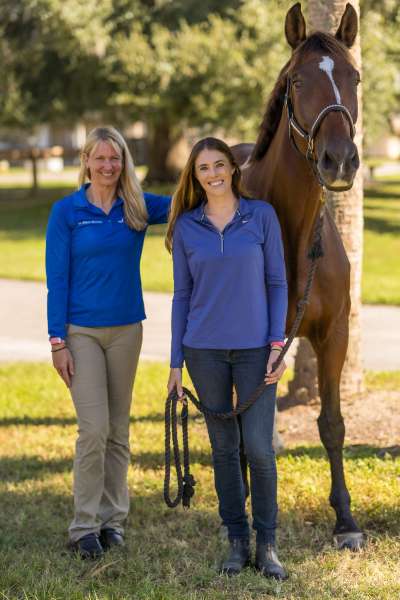 Thanks to a village of committed equine professionals — including University of Florida veterinarians and owners who refused to give up on him — a 9-year-old American Warmblood gelding who nearly died from an aggressive bacterial infection has beaten the odds and is now back in the show ring, a national contender in dressage competition.

The 17.2-hand bay gelding, aptly named Casino Royale, was purchased in 2014 as a 5-year-old for Sarasota resident Danielle Ammeson to ride in competitive dressage events. The two were off to a good start, having qualified for the U.S. Dressage Foundation’s 2016 Regional Championships in Conyers, Georgia, when the horse was injured in a pasture accident that left him non-weight-bearing on his right hind leg.

Ammeson found Royal, as she calls him, motionless in the pasture.

“When we inspected his leg, we found he had an oozing, large wound on the back and side of his hock,” she said.

Treated almost daily for a week by Ammeson’s veterinarian, Kaiser Clinton, D.V.M., of Sarasota, Royal received three regional limb perfusions, allowing a high concentration of antibiotics to enter the tissue near the site of his injury. But he did not improve.

“We made the decision to go to UF,” Ammeson said.

Veterinarians at UF’s Alec P. and Louise H. Courtelis Equine Hospital diagnosed Royal with a serious bacterial infection involving his tendon sheath, tendon and bone of his hock. The horse was scheduled for emergency surgery the next day.

Alison Morton, D.V.M., a clinical associate professor and chief of large animal surgery at the UF College of Veterinary Medicine, performed a tenoscopy, a technique similar to arthroscopy, in which tiny incisions in the skin allow for careful visualization and cleaning of tendon injuries, to flush out the tendon sheath where the wound had entered. She then surgically removed areas of infected tendon and bone.

Culture tests were performed to identify the bacteria causing the infection and to determine appropriate antibiotic therapy. While waiting for the lab results, veterinarians treated Royal with broad-spectrum intravenous antibiotics and antibiotic regional limb perfusions. The lab results were promising, showing that initial bacterial growth was susceptible to the therapy. But despite weeks of this treatment, Royal’s infection worsened.

“As more time passed, with no response to the antibiotics, Royal’s survival rate was diminishing,” Ammeson said. “How long can a horse live on three legs before he founders, or his body gives out?”

UF veterinarians tried to keep Royal comfortable through the use of analgesic medications and by packing his hooves with foam to provide support to his remaining hooves, but it was clear that the horse’s mental as well as physical well-being were at stake.

“Dr. Morton would call us every day to provide a status report but finally suggested that it was time to think about euthanasia as things were not getting any better,” Ammeson said. “When she would call, we would agree to wait one more day to make a decision.”

Morton was able to obtain a different antibiotic the bacteria were susceptible to but had become temporarily unavailable. Initially after treatment with the new antibiotic, radiographs and ultrasounds did not reveal any improvement — but Royal’s condition had stabilized; he was no longer worsening.

Gradually, Royal’s condition began to improve. He had extensive damage to his bone and tendon that could heal, but he was likely to have permanent damage that would limit his likelihood of returning to performance, Morton said. His care team continued to be concerned that Royal could founder at any moment in his opposite hind limb from compensatory weight-bearing.

“Throughout all of Royal’s time in the intensive care unit at UF, about four weeks, he was always positive, and gave a nicker to passing guests,” Ammeson said. “That might have been because Dr. Andrew McClain would pack an apple for himself, but end up giving Royal a treat.” McClain, a large animal surgery resident, was one of the team of clinicians caring for Royal during his time at UF. 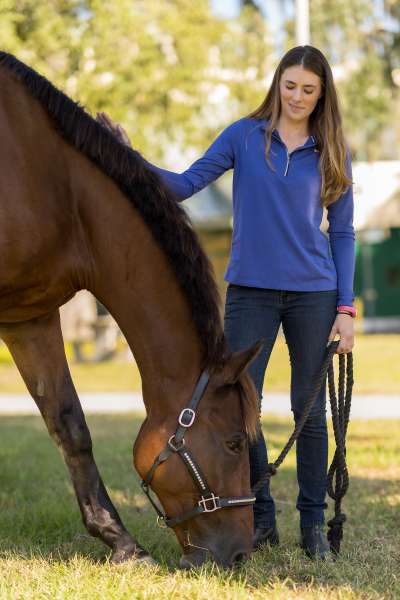 “Royal was an excellent patient with tremendous character and personality, which is one of the reasons for his successful outcome,” Morton said. “He allowed us to treat him daily, tolerating the pain and discomfort without complaint. He took care of himself. He laid down most of the day and would get up a few times daily to move around a bit, receive his treatments and eat and drink. He never lost his will to survive and his personality wouldn’t let you give up on him.”

Not many horses have that type of character, nor would many survive the type and severity of infection that Royal did, Morton added.

“Our family agreed that Royal never gave up, so we should not give up on him, either,” Ammeson said. “As long as he was willing to fight, we were going to fight on his behalf.”

At the time of his discharge, Royal had severe muscle atrophy on his right hind quarters and he had lost muscle throughout his entire body. He was still very lame and would not bear full weight on the limb. He continued on the antibiotic and was placed on stall rest for months, giving his tendon and bone time to heal. Ammeson cleaned his wound with iodine and changed his bandage each day, as his wound was still open and draining.

Back home in Sarasota, Royal started additional rehabilitative treatments, including laser therapy and weekly massages, for pain relief and to accelerate the healing process. In late November 2016, he was able to walk, albeit with a slight limp. Ammeson’s farrier custom-made shoes for Royal’s hind foot, placing a shoe with a wedge to prevent overstressing the tendon.

Ammeson continued to bring Royal back to UF in 2017 for check-ups. Each visit, Morton would compare the encouraging new ultrasound results. In March 2017, Morton agreed to allow Royal to begin exercising to build body strength and stimulate further tendon and bone healing.

“He learned to long-line at the walk and trot,” Ammeson said, referring to a technique that involves working a horse from the ground with two reins, simulating riding, and is often used for rehabilitation and to build communication and trust between rider and horse.

Ammeson continued working with Royal, and month by month, he grew stronger and more confident in her hands. By April 2018, the two were back in dressage competition. Royal continued to improve and do well in the show ring — so well that this year, the pair qualified for first level and a musical freestyle event at the U.S. Dressage Foundation’s regional championships in October — the same event they almost participated in, but had to withdraw from, just three years ago, due to Royal’s injury.

Royal came in ninth. More recently, he came away with a blue ribbon from a higher-level competition, for a total of three medals in 2019.

“We are so proud of our miracle horse,” Ammeson said.

Added Morton, “We are so proud of them all! Not many horses survive the injury and infection that Royal suffered, let alone return to any degree of performance. The dedication and patience that the Ammesons committed to Royal’s treatment, rehabilitation, strengthening, and conditioning is no doubt what made the difference. It provides us hope and inspiration for treating other horses like Royal.”